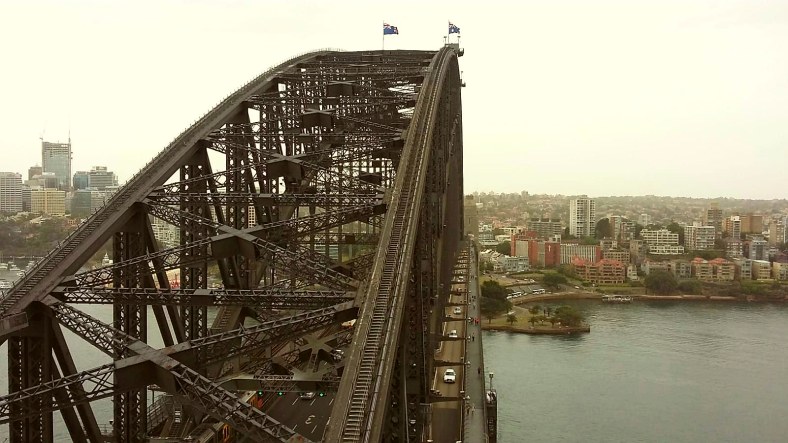 When this was originally suggested as something we’ve “got to do”, I thought the world had finally gone mad. Then when I suruptitiously looked up the details, the rediculous cost involve and it is probably all booked up, thought I’d sealed the deal for not doing it…

“Think we should go for it.”

So, after much thought and consideration… (‘Think of all the clothes/posh handbag I could buy with the money?’), I agreed to climb the bridge. It will be a good workout, if nothing else.

‘We can go on any day, and most times are available.’ Hubby joyfully informs me…

Since 1912, J.J.C. Bradfield, “Chief Engineer of Sydney Harbour Bridge and Metropolitan Railway Construction” was keen on the idea of a bridge. At that time it was deemed prudent to spend money on the war effort.

After World War 1, Bradfield went to investigate tenders and decided an arch design would be beneficial and the work was given to NSW Department of Public Works for their design. Dorman Long Co Ltd was given the contract,  because of their experience with the Tyne Bridge, also an arch.

The “turning of the first sod” ceremony was held on 28 July 1923 and arch construction of the abutment towers began 26 October 1928.

Sydney Harbour Bridge connects Sydney central business district (CBD). Apart from practical transportation uses, it  also has become a tourist attraction and is used by tourists, including myself, for them to partake in climbing to the top of the arches.

When arriving in Sydney you quickly realise the enormity of the construction. You are able to see parts of the bridge, from many areas of Sydney.

It was FANTASTIC! Couldn’t have enjoyed the experience more. You are given all the gear and instructions and off you go. Everything is attached to your boiler suit, including one’s glasses, and you are not allowed to take anything with you (including cameras, phones, etc.). Our guide was Scott. He is a funny, outgoing chap who clearly knows what he is doing and instilled confidence in everyone.

First you climb up ladders, have a brief (history) chat then a walk along towards the arch. Photography is undertaken throughout the session including a team one and it is enormous fun. The exercise didn’t faze me at all and neither did the height. The whole jolly expedition is well worth doing. The stories and history about the bridge are fascinating (which you are told about as you go along) and I would highly recommend the experience. 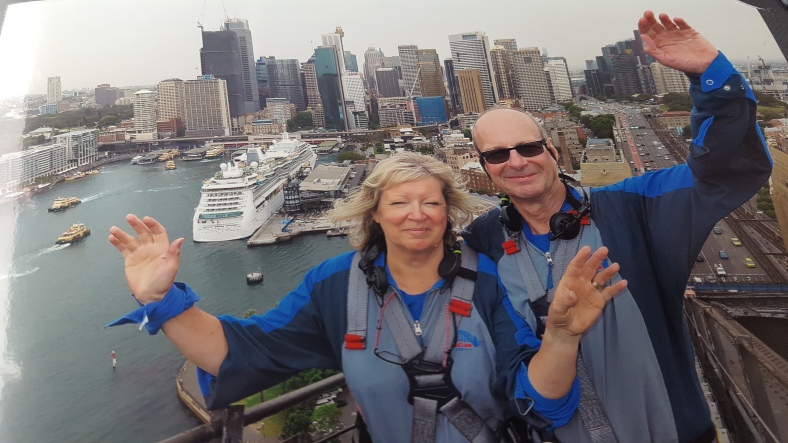